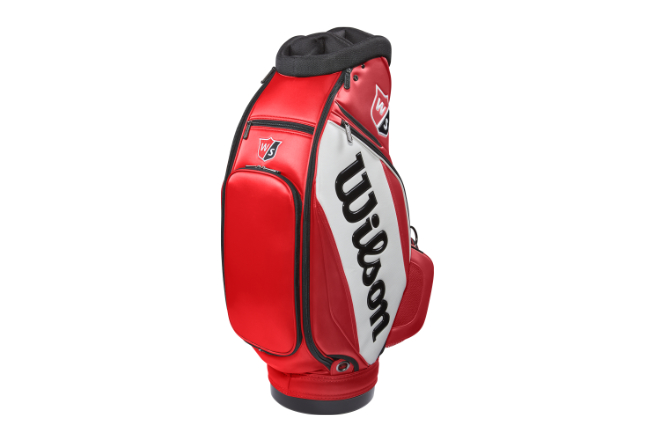 Wilson Tour stars around the world, including Major winners Padraig Harrington and Paul Lawrie, joined together over the weekend to post videos on social media platforms marking the arrival of their brand new Wilson Staff Tour Bag.

Designed to give the players a standout look at the restart of this year’s Tour season, the new bag features the classic Red & White Wilson branding, matched with prominent black lettering on the side panels and the famous Wilson Staff crest.

Three-time Major winner Harrington, captain of the 2020 European Ryder Cup team and a prominent social media figure with his popular playing tips, awaits news about the event at Whistling Straits scheduled for September; while former Open Champion Lawrie was a winner at the 2019 Scottish Senior Open during his debut season in the senior ranks.

“It’s great to see so much enthusiasm from our Wilson Tour Advisory Staff players around the introduction of the new Tour bag,” said Doug Wright, Global Commercial Director at Wilson Golf in Chicago. “The distinctive Red & White bag has become synonymous with the Wilson brand over the years and we hope this new edition will herald another period of tournament victories to add to the 62 Majors played with Wilson irons, more than any other brand,” he added.

Created for functional convenience, the latest Wilson Staff Tour Bag was inspired by the feedback from its celebrated Tour players and caddies, who can all relate to the historic Red & White bag that carried so many champions to victory over the years. It contains seven storage pockets, including a generous front pocket; waterproof pockets for cell phones and electronics; a large pocket for golf balls; plus velour-lined pockets for valuables and insulated sleeves for beverages. An exclusive 10” x 9” top with six dividers makes it easy to get the clubs in and out of the bag, that also comes with a 3-point padded strap. Weighing 10.5 lbs / 4.7 kg, the bag incorporates a full-length umbrella sleeve and rain/travel hood.

The cart bag version of the Wilson Staff Pro Tour Bag is available at a RRP of £350.
For more information on all Wilson Staff products, including woods, irons, wedges, putters, balls and accessories, visit www.wilson.com.