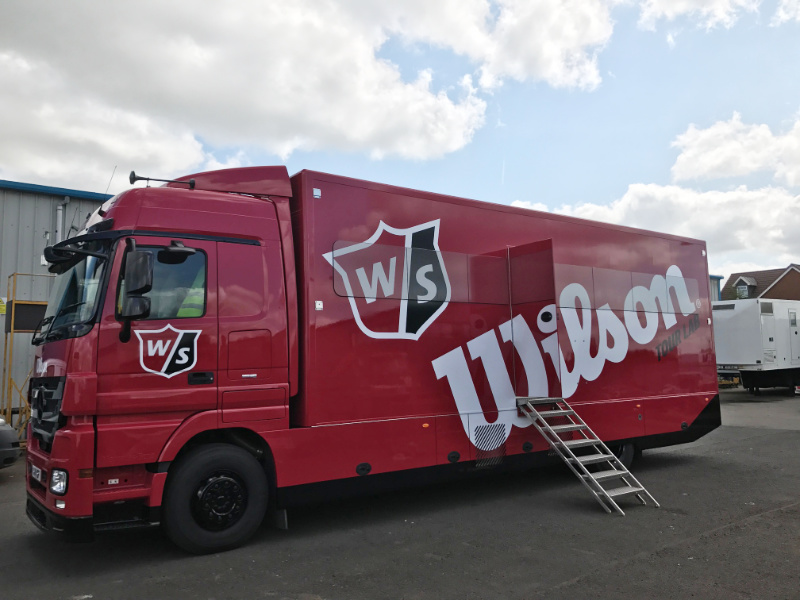 Wilson Golf has modernised its Tour truck to reflect the demands of young players on the Challenge Tour, as well as European Tour stars like Open winners Padraig Harrington and Paul Lawrie, plus new champion Joakim Lagergren.

The truck features a brand-new look in a traditional Wilson red colourway, along with the brand’s historic shield logo appearing prominently on the side, back and even the roof. It houses the latest machinery for club-making and customisation, plus a comfortable interior to give Tour players an area to relax away from the course and practice range.

“We have nine players on the Challenge Tour this season, so the investment in the truck is designed to give these young stars of the future as much support as possible,” said Tour Manager, Phil Bonham. “We also continue to look after our established Tour players on the European Tour, so to have a distinctive new truck that projects the brand’s modern outlook is a real positive,” he added.

Wilson Staff players using the truck include three-time Major Champion and six-time Ryder Cup star Padraig Harrington, who has been associated with Wilson for more than 20 years, one of the longest relationships in the game; Paul Lawrie, the Open Champion at Carnoustie in 1999, who returns to the historic Angus links in July; Englishman Paul Waring, who sits comfortably inside the Top-100 in the Race to Dubai standings; and Swedish sensation Joakim Lagergren, recent winner of the Rocco Forte Sicilian Open using the brand’s FG Tour 100 irons.

The eye-catching truck will be seen at most of the lucrative Rolex Series events on the European Tour, starting with the BMW PGA Championship at Wentworth this week. After visiting Köln, Germany for the BMW International Open, it will arrive in Ballyliffin GC, Co Donegal for the Irish Open, before heading for two weeks in Scotland – first at Gullane GC for the Scottish Open, then a short trip north for the 147th staging of the Open Championship at Carnoustie.

For more details about Wilson Staff clubs and the rest of the golf range, visit: www.wilsongolf.com